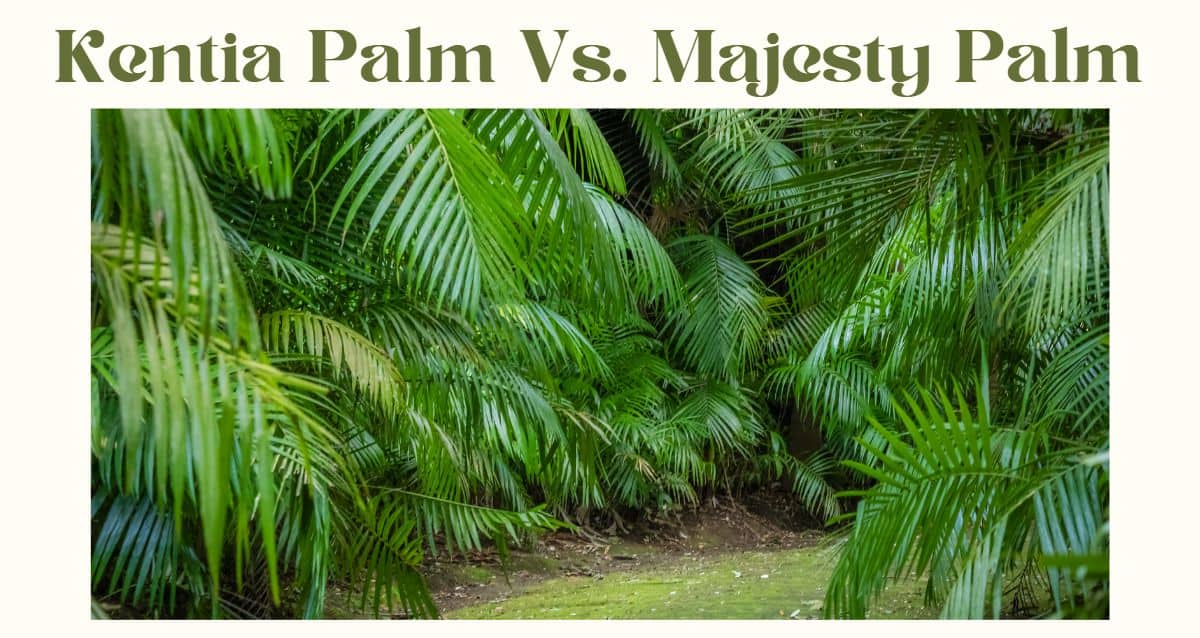 As anyone who has ever stepped foot into a tropical jungle can attest, there are an astonishing number of different palm trees. There are over 2600 species of palm trees in the world! This wide variety of palms means a palm tree to suit every taste and need, from the delicate and dainty to the towering and imposing.

Two of the most popular palm trees are the Kentia palm and the Majesty palm. Both palms are native to Australasia and are widely used as indoor plants in homes and businesses worldwide. So, what are the differences between these two popular palms? Read on to find out!

Regarding houseplants, the Kentia palm (Howea forsteriana) is about as close to perfection as you can get. Hardy, easy to care for, and tolerant of a wide range of growing conditions, this palm is an excellent choice for beginner plant parents and experienced horticulturists alike.

A native of Lord Howe Island off the coast of Australia, the Kentia palm is an evergreen tree that can grow up to 40 feet tall in its natural habitat. In cultivation, however, it is typically much smaller, topping out at around 10-12 feet. The leaves are long and slender, with a graceful weeping habit that gives the plant an elegant, tropical appearance.

Kentia palms are relatively slow-growing, so they are perfect for people who want a low-maintenance plant that will not outgrow its space too quickly. They are also quite drought-tolerant, so if you tend to forget to water your plants regularly, this palm is a good choice for you.

One of the most noteworthy things about the Kentia palm is its ability to tolerate low-light conditions. Most houseplants prefer bright, indirect sunlight, but the Kentia palm will do just fine in a shady spot. This makes it an ideal choice for rooms that do not get much natural light, such as basements or north-facing rooms.

One of the most popular indoor palms, Majesty Palm (Ravenea rivularis), is an elegant palm with long, feathery fronds that arch gracefully from a slender trunk. It’s perfect for creating a tropical oasis indoors and is surprisingly easy to care for.

Majesty Palm is native to Madagascar, where it grows along riverbanks in the wild. It can reach up to 80 feet tall in its natural habitat, but it is much smaller when grown in pots.

This palm is not only attractive but also easy to care for. It tolerates a wide range of temperatures and does not mind being pot-bound, making it an ideal indoor plant. In addition, it is relatively drought-tolerant and does not require much fertilizer.

With its graceful fronds and stately appearance, Majesty Palm is a welcome addition to any indoor space!

A Detailed Comparison of Kentia Palm Vs. Majesty Palm

Here’s a detailed comparison of the two most popular palm plants – Kentia Palm and Majesty Palm.

One of the most apparent differences between the Kentia palm and the Majesty palm is size. The Kentia palm is relatively tiny compared to the Majesty, typically growing to around 40 feet or more. On the other hand, the Majesty’s palm can grow to a massive 80 feet tall!

Additionally, the Kentia palm and Majesty palm also differ in the way their leaves are arranged. The leaves arrangement of the Kentia palm is in a spiraling pattern, while for Majesty palm, they are in a more random pattern. This difference is most apparent when you look at the palms from above.

Another critical difference between these two palms is the type of soil they prefer. The Kentia Palm is much more tolerant of different soil types than the Majesty Palm. The Kentia Palm can grow in poor, sandy soils as long as they are well-drained. On the other hand, the Majesty Palm prefers rich, loamy soils that are high in organic matter and retain moisture well.

Therefore, if you’re thinking of planting a Majesty Palm, please amend your soil with plenty of compost or other organic matter before planting.

These palms also differ in their tolerance of salt. The Kentia Palm is much more tolerant of salt than the Majesty Palm. This is because the Kentia Palm originates from an island near Australia, where it is exposed to salt spray from the ocean.

The Majesty Palm, on the other hand, originates from inland rainforests and is not accustomed to salt. So, for people living in an area with salty air or water, the Kentia Palm would be better than the Majesty Palm.

Both the Kentia palm and the Majesty palm prefer indirect sunlight, making them ideal for use as houseplants. However, there are some subtle differences in the light requirements of these two species. The Kentia palm is native to the shady rainforests of Australia and New Guinea, while the Majesty palm hails from Madagascar.

Regarding watering, the Kentia palm and the Majesty palm are two completely different species. The Kentia palm is a very drought-tolerant plant. This means it can go for long periods without being watered. You only need to water this plant when the soil is parched. If you water it too often, the roots will start to rot, and the plant will eventually die.

The Majesty palm, on the other hand, is not as drought-tolerant as the Kentia palm. This means that it will need to be watered more frequently. The best way to water a Majesty palm is to water it deeply and then allow the soil to dry out completely before watering it again. If you water it too often, the roots will start to rot, and the plant will eventually die.

Explore: How to Grow and Care for Peacock Plant?

Concerning pruning, the Majesty Palm is a bit more high-maintenance than the Kentia Palm. Its fronds can get very heavy, so it’s essential to trim them regularly to prevent them from drooping and damaging the trunk. Additionally, the Kentia palm is relatively easy to prune compared to the Majesty palm.

It’s also important to prune off any dead or dying leaves, as these can attract pests and diseases. If you see any browning or yellowing fronds, it’s best to cut them off at the base.

The Kentia palm and the Majesty palm are susceptible to various pests and diseases. Regular insecticidal soap or horticultural oil applications are adequate to control scale, mealybugs, and spider mites. For fungal leaf spots, good air circulation and avoiding overhead watering help to reduce the spread of disease.

However, it is essential to remember that price is not the only factor when choosing a palm plant. Both Kentia palms and majesty palms require special care and attention. Be sure to do your research before making a purchase.

Which Palm Tree is Right for You?

As you can see, there are several significant differences between the Kentia palm and the Majesty palm. So, which palm tree is right for you?

You may read more: