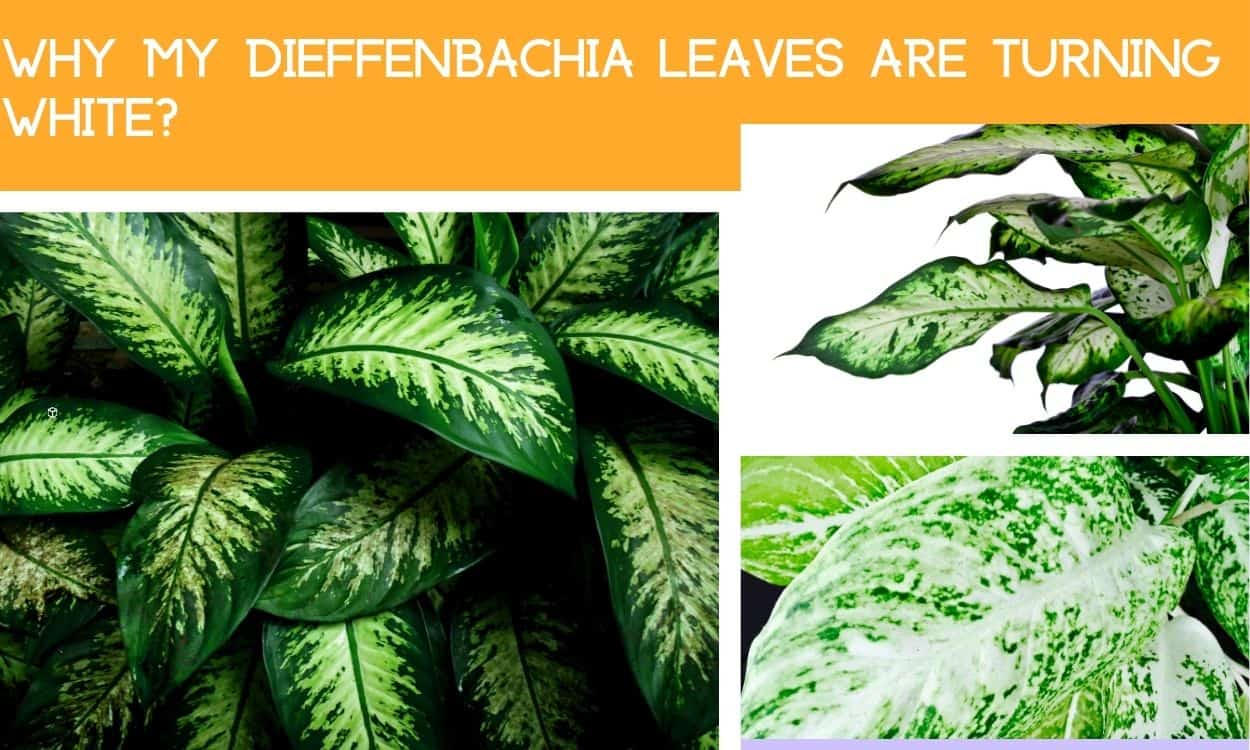 Dieffenbachia, or dumb canes, are excellent indoor houseplants, as they can add a dramatic flair and pop of color to any room through their lush green leaves. Several plant owners opt to decorate their houses and offices with a dieffenbachia, as the plant is adaptable to different light conditions and can sometimes forgive its owners for a little inattention.

However, if you want your dumb cane to look beautiful, you must learn how to care for it properly and provide it with suitable light and a surrounding environment so it can grow and thrive properly. 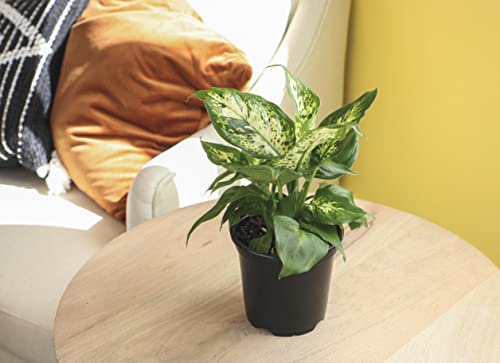 A dieffenbachia can easily overcome many challenges it faces for its normal growth, but there are specific requirements that you must take care of, as little negligence can affect the beauty of this plant.

Most houseplant owners’ most common blunder is overwatering their indoor plants. Dieffenbachia can die from root rot if the plant is overwatered for a long time. Similarly, the reason for dieffenbachia leaves drooping can be too much sunlight, as it burns the new tender leaves and burns them to a yellow color.

Dieffenbachia must be rotated regularly so that every part of the plant receives equal sunlight. Dieffenbachia generally prefers filtered and diffused light, and even though the growth is slower in low-light conditions, the plant looks healthier and more beautiful.

Nitrogen is essential for the beautiful leaf color of dieffenbachia, and it needs fertilizers twice a month to encourage healthy growth. Dieffenbachia is also an easy target for spider mites, but browning of the bottom leaves is a common phenomenon.

Check here: Can You Grow Dieffenbachia From Cuttings? 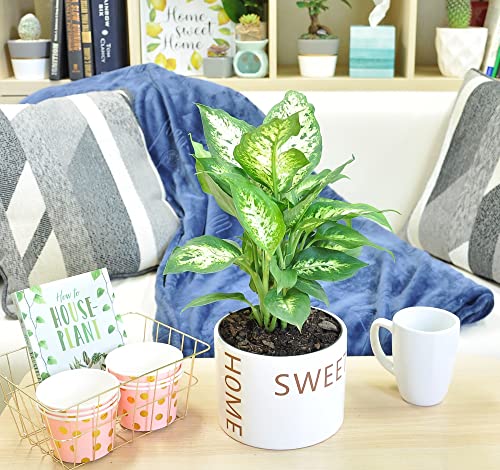 Why Are My Plant’s Leaves Turning White

Several reasons for your dieffenbachia leaves turning white include nutrient deficiency, low temperatures, under watering, or some other phenomenon.

A dieffenbachia plant can face numerous problems that challenge its health and growth. As a plant owner, it can be quite discouraging to see this easy-to-maintain plant succumbing to some unforeseen disease.

You must identify the root problem and resolve it before it damages your plant irreversibly and eventually kills it.

Underwatering a dieffenbachia will give rise to intense dehydration that will produce its initial effects by damaging the color of the plant leaves. Dieffenbachia is a tropical plant. If it is not adequately watered, it can dry out quite easily.

The dieffenbachia maintains its leaves’ healthy green color by transporting a sufficient amount of water, and the scarcity of it will let the leaves lose their color and fade. Another prominent indication of underwatering is dieffenbachia leaves drooping.

If you notice white color or spots on dieffenbachia leaves, and you think it is because of dehydration, check the plant’s soil and whether it is dry. Start watering your plant more frequently if the soil is not wet enough. 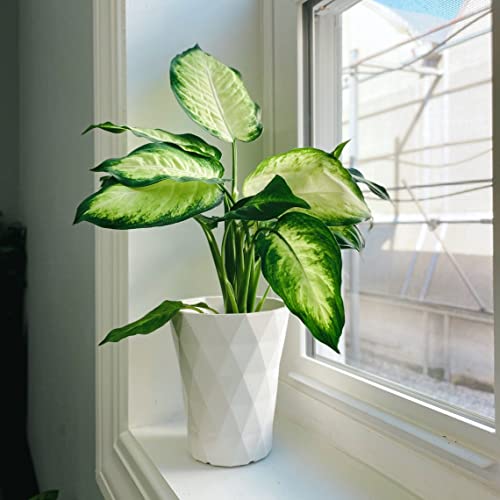 Photosynthesis is a conversion reaction through which a plant changes the light energy into chemical energy. Photosynthesis occurs in the chloroplasts, which have an essential pigment called chlorophyll.

Plants with non-green leaves also contain chlorophyll but in lesser quantities. Under intense stress episodes, when supersaturating light intensities are damaging a plant, it can adjust its rate of photosynthesis by light-induced chloroplast movements.

Powdery mildew appears like white spots on the foliage. Over time, the whole dieffenbachia plant succumbs to its effects and dies. It is a contagious fungal disease and must be eradicated before it spreads to the rest of the plant.

Powdery mildew can give a powdery white appearance to your dieffenbachia leaves and can appear on your plant whenever it is subjected to poor light and air circulation.

The fungus can be treated with a spray of baking soda, liquid soap, and water, and if the disease has progressed to threatening levels, you can also use horticultural oil. 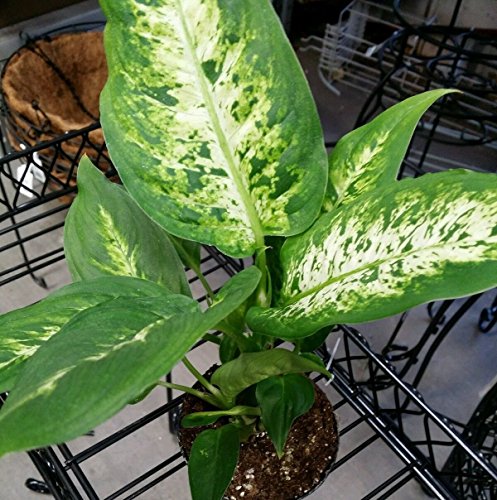 If you think your dieffenbachia leaves are turning white due to nutrient deficiencies, you can run a soil test to detect the real problem with your plant.

An acidic pH of the dieffenbachia soil or poor fertilizers applications can lead to the unavailability of nutrients for the plants. Nitrogen is one of the critical nutrients required for the proper color development of dieffenbachia leaves.

Using appropriate compost and an N-containing fertilizer can reverse the effects of nitrogen deficiency and bring the plant to its former glory.

Have a look: How to Transport a House Plant During a Move?

Many nutrient deficiencies can lead to chlorosis, which is losing of green coloration of plant leaves. Chlorosis, also called greensickness, is indicated by the yellowing or blanching of the plant leaves.

While chlorosis is usually caused by the lack of nutrients like iron or manganese, it can also be caused by a lack of light. Dieffenbachia is also subjected to chlorosis if you do not provide it with essential nutrients. The insufficient amounts of these nutrients in the soil. Due to their unavailability or high soil pH, it can cause the yellowing of dieffenbachia leaves.

Manganese deficiency can cause interveinal chlorosis, which is indicated by the yellowing or blanching of leaf areas between their veins. The leaf surface becomes pale, but the veins remain green.

Chlorosis is a condition in which a plant loses its chlorophyll, and as chlorophyll is responsible for imparting the green color, losing it would mean the leaves turn white, pale yellow, or yellow-white. 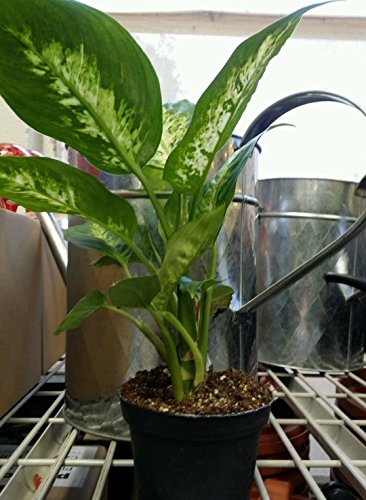 Even though dieffenbachia plants love diffused and filtered light, keeping them in extremely low temperatures can affect their leaf appearance. Dieffenbachia is a tropical plant, and if you keep them in temperatures lower than 60°F, then it will not remain healthy anymore.

The effects of low temperature are first evident from the discoloration of leaves. The leaves turn from green to a pale yellow, and if the problem is still not resolved, they will eventually fade to white and then fall off your plant.

Keeping dieffenbachia in a warm and humid environment will protect it from conditions that cause the whitening of its leaves.

Check out: Which Tropical House Plant Is Poison for Cats?

Spider mites also weave a delicate silky web in the corner of stems and leaves, so if you notice white powdery webbing on your dieffenbachia leaves, it can be due to spider mites.

Spider mites are sap-sucking pests that can instantly drain your plant leaves until they turn yellow and fall off the plant. If spider mites infestation is detected early and properly treated, the plant can recover from its damage. Remove the infested foliage from your dieffenbachia plant, and wipe the leaves with an insecticide soap.

If you are not already aware, there are several types of dieffenbachia out there that have naturally white surfaces on their leaves. Dieffenbachia honeydew has striking golden yellow leaves with a green color present only on borders. Similarly, the green foliage of dieffenbachia mary displays beautiful leaves adorned with white spots.

Every variegated dieffenbachia has different patterns of green and white. However, if you notice that the leaf has gone completely white, you should worry about your dieffenbachia. 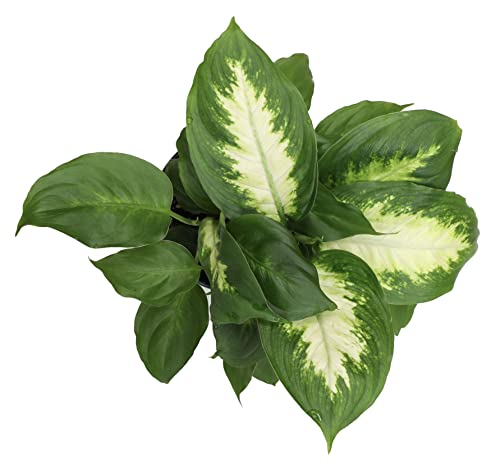 Dieffenbachia is a beautiful houseplant with various green and cream or white colored patterns on its leaves. Like other plants, dieffenbachia is also prone to several health problems and diseases. One of the alarming situations can arise when dieffenbachia leaves start turning white.

That is when you should be anxious about your plant’s health and try to find the root cause and eradicate it as soon as possible.