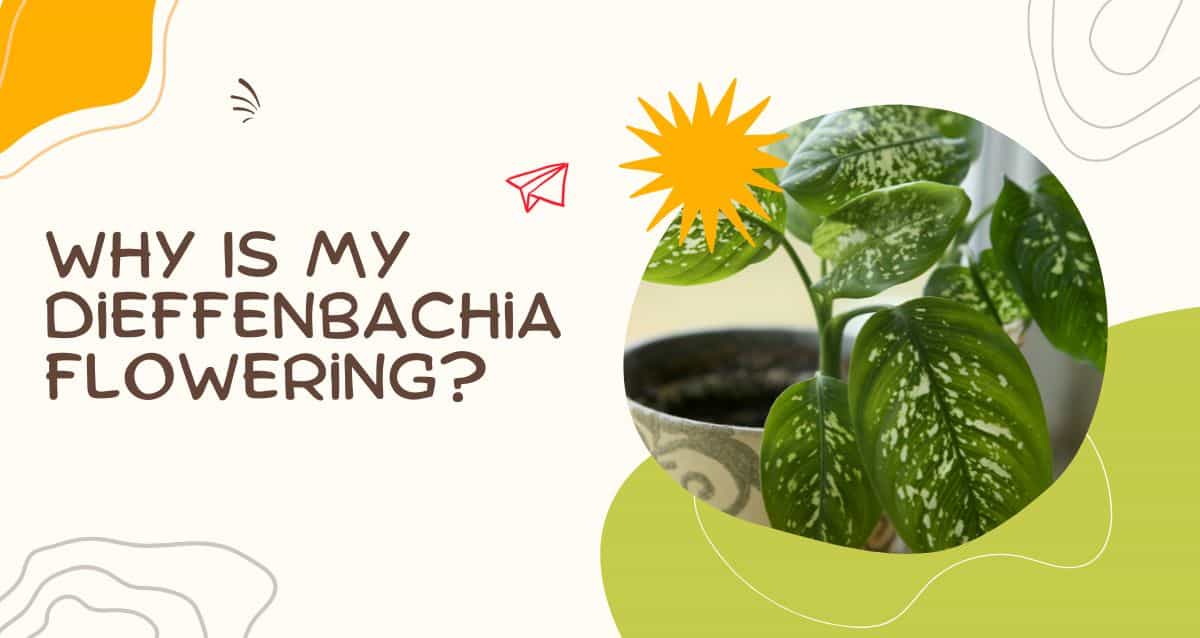 Caring for houseplants involves learning about their flowering patterns, watering needs, soil types, fertilizer schedules, and more. If you have a Dumb Cane plant and are wondering why Dieffenbachia has suddenly started to flower, you will find your answers below.

Why Is My Dieffenbachia Flowering?

The plants often don’t begin to bloom for at least a few years after they are planted. For the majority of aroids to blossom, sunlight too is essential. Dieffenbachia can tolerate low light levels but usually won’t bloom unless it receives a sufficient amount of strong, indirect light.

When they bloom, the blossoms aren’t very attractive or aromatic. They resemble the form of a Peace Lily’s flowers but lack any vivid coloring to make them distinguish them from the rest of the plant. You may wait to take the blossoms off until they have wilted unless their fragrance bothers you.

How Do I Make My Dieffenbachia Bloom?

Dieffenbachia plants require a lot of indirect but bright light to blossom. They won’t withstand bright sunshine, however. Giving them the ideal quantity of light for them to blossom may thus be a tricky balancing.

The best place for them is beside a bright window where they will get plenty of natural light (but not direct sun). You can always use a grow light if you can’t provide them with enough natural daylight.

Flowers are also encouraged by feeding. Therefore, be careful to feed the stupid cane if you’re determined to see if you can convince it to bloom.

Do Dieffenbachia Flowers Have a Fragrance?

Flowers from dumb cane plants can have a variety of smells. Some are almost completely odorless, while others emit an earthy aroma that is detectable from a distance. The aroma has been described as dust, cucumbers, black pepper, and rotting wood.

However, it’s a fragrance that appears more at ease on the mossy bottom of an old forest than in a living room, even if most people don’t find it particularly unpleasant.

A Dieffenbachia, much like most aroids, is naturally pollinated by insects, so its scent isn’t precisely tailored for human noses. To such insect scavengers, the fragrance of musty leaf litter undoubtedly smells like a meal.

It might be worse since certain other aroids, like the massive Titan Arum, imitate the scent of decaying carcasses to lure carrion-eating insects.

Should Dieffenbachia Flowers Be Cut Off?

You could be pondering if you need to just cut the dumb cane’s flowers since you didn’t purchase it for them.

It depends on you, to be honest. There’s no reason to keep the inflorescences if you don’t find them intriguing. Even before the blossom opens, cut it off to assist the plant in conserving energy for developing bushy foliage.

Sporadic reports of Dieffenbachia stalks decline after blooming, although this doesn’t appear to happen very often. Given that Dumb Canes often don’t begin blooming until they are relatively mature, the observers could simply be seeing typical senescence (or the gradual dying down of old leaves) and presuming it is connected to the bloom.

Luckily, the Dieffenbachia will typically have grown a few side branches by the time it is set to bloom, so they may survive if the central stalk begins to wither.

Although you appreciate how the inflorescence looks, you should remove it as soon as it begins to dry up and lose its color. If not, it might grow mold, which could harm the health of the plant and you.

Remember to clean the pruning scissors before clipping a Dieffenbachia blossom, and always wear gloves to guard against the possibly unpleasant sap on the skin.

How to Preserve Pollen from Dieffenbachia Plants?

Do you intend to cultivate fresh plants from the seeds and breed more Dieffenbachia plants? Although we dare not say it’s impossible, your road ahead will be difficult.

Although if you manage to produce an inflorescence from one of these plants—which is difficult enough—it won’t be capable of reproducing by itself.

After the female section of the spadix has finished being fertile, the male version of the spadix begins to produce pollen. You will need to store some pollen and await another blossoming stage if you have numerous blooms at once.

Around two to three days when the spathe opens, you may start collecting pollen since the top half of the spadix will be coated with what seems to be greenish-yellow fluff. The pollen is a part of that dust. On a piece of aluminum foil or paper sheet, brush or tap it to collect it -this will be easier if you cut the inflorescence off.

After that, create a little package out of the foil or paper and place it inside a sealed plastic ziplock bag. After that, put it in the refrigerator.

To absorb excess moisture, it might be useful to add a package of silica gel particles to the bag. The pollen can remain viable for one year in dry, chilly circumstances.

What Fertilizers Work for Dieffenbachia?

Simple indoor plants like Dieffenbachia can thrive without fertilizer is another fantastic feature. But a Dieffenbachia will benefit immensely from being fed, just like any potted plant.

Rather than applying chemical plant fertilizers, we strongly advise utilizing organic ones. Dieffenbachia houseplants frequently experience brown leaf tips and edges due to over-feeding with artificial fertilizers, among other problems.

Compost fertilizer, available as a liquid or as compost tea bags, can be used to make a homemade brew. Additionally, you might use compost tea to spray the plant leaves.

Put it in any spray bottle and spritz the plant’s leaves; they will enjoy the additional dampness! A potted plant fertilizer or a general-purpose natural food are two other organic fertilizers that will come in handy.

Plants should only be fed in the summer or spring (during the active growing months). It is preferable to let them relax as they enter a dormant condition in the winter.

How Much Water Does Dieffenbachia Plant Need?

The primary concern you should have while cultivating Dieffenbachia is overwatering.

Dieffenbachia care must include proper watering; persistent overwatering will unquestionably result in the death of the plant.

Just be careful to poke a finger approximately an inch into the dirt to evaluate the soil’s condition before watering.

Let the soil dry up a little between waterings, but don’t let it become entirely parched. It is time to water when the soil isn’t moist anymore.

Give the Dieffenbachia a thorough soak until water begins to flow from the drainage pores. Before placing the plant back on the plant tray, let the extra water drain from it. Never let water sit in the pot.

We advise purchasing a soil moisture sensor if you have trouble determining when to water the plants. You’ll be able to keep an eye on the moisture level and ensure you’re watering the plant appropriately.

Although dumb cane plants will adjust to thriving without it, they also strongly like humidity. But if yours often has brown tips, leaves, or edges, you may want to attempt to run a humidifier close by to see if it helps.

Check out: Why are my Peacock plant leaves pointing up?

How Much Light Is Required for Dieffenbachia?

The idea that Dieffenbachia needs little sunlight is another myth. This is incorrect; mild shades are okay, but nothing darker. A flourishing plant needs indirect, strong light to be maintained.

Whenever the sun is at its warmest, in the middle of the day or early in the afternoon, keeping it out of direct sunlight can be a good idea.

Nevertheless, if the light levels are excessively high, the leaves may burn; if they are too low, the plant will become lanky and unappealing. Find the right equilibrium for the plant, and maintain it.

While it is true that Dieffenbachia are toxic, neither humans nor animals are often gravely harmed by them. Every component of the plant contains many tiny calcium oxalate particles in the form of needles. When an unlucky animal (or human) eats it, they suffer from a sore and inflamed mouth.

The colloquial moniker “Dumb Cane” originated because, in certain instances, the swelling is so severe that it renders the afflicted speechless due to their inability to speak. As a result, it may result in several undesirable side effects and considerable discomfort.

Avoid touching the sap, but if you do, wipe it off quickly to avoid accidentally rubbing the eye or another regrettable area.

If you can get beyond this flaw, Dieffenbachias feature among the most exquisite combinations of white, green, and yellow leaves you’ll ever see on a houseplant.

Dieffenbachia plants are truly majestic houseplants that don’t need a lot of direct maintenance and care. If you have a Dumb Cane that has started flowering, there is no need to worry! They start doing that after a few years. All you need to do is continue taking care of the plant’s needs to make sure it continues to flourish and grow into a healthier plant.