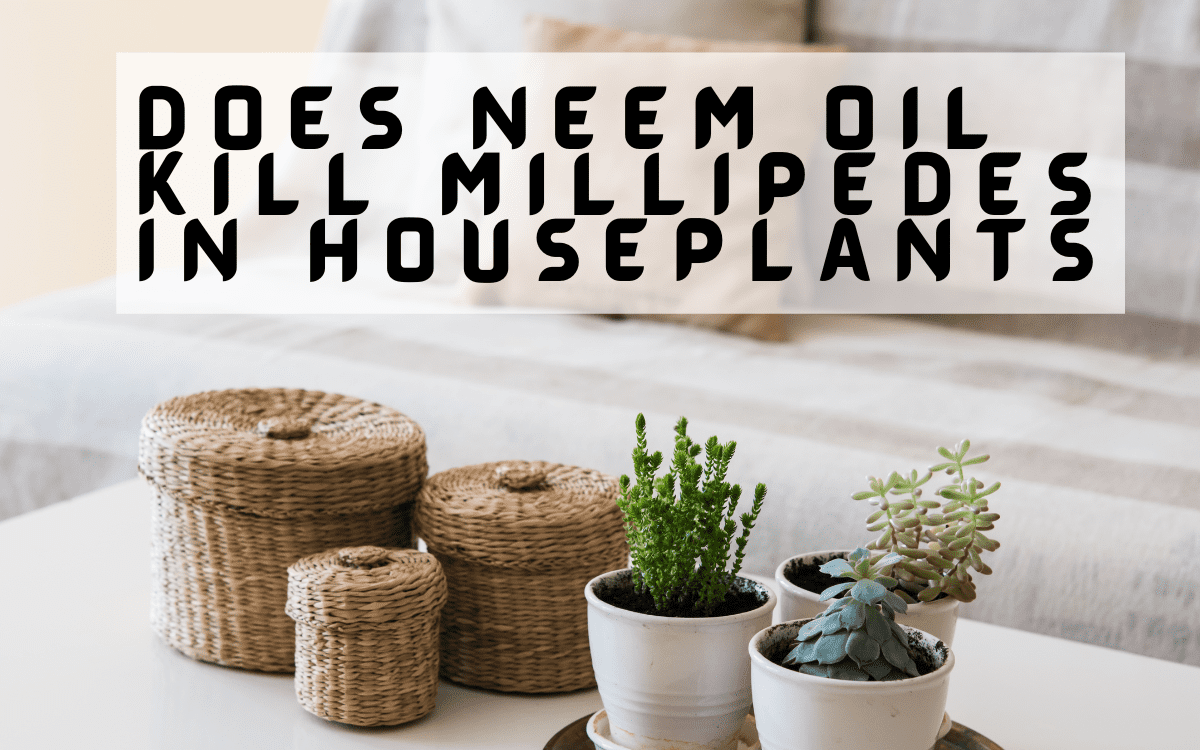 Millipedes enter homes and hide in exterior potted plants to find the dimness and dampness they need to survive. They love to make their home in decaying leaves and mulch.

Millipedes pose no threat to plant life. However, not every gardener agrees that they should be allowed free reign of the house.

Neem oil is a natural insecticide. It can be found in the seeds of the Indian neem tree. It is extracted from the tree’s roots and can be sold in pure form or mixed with other chemicals so it can be used as a pesticide.

It is a commercially available tree-seed oil that can be used alone or as a component in pesticide formulations. People in the United States use this oil to ward off pests and insects, especially in Miami.

While it is not a toxin per se, its chemical effects on insects’ nervous systems and hormones cause them to stop feeding and mating, ultimately leading to death.

Neem oil, in contrast to organic treatments, kills insects and repels them. It leaves a residual impact that keeps these insects away for a long period of time.

This oil acts quickly. However, it might take a while for all the insects to leave your houseplants.

How to Use Neem Oil on Houseplants

It’s essential to know how to use neem oil on your houseplants to eliminate millipedes. Follow the steps below:

Make sure there is no damage to the houseplant by testing the solution on a couple of leaves before applying it to the entire plant. The minimum waiting time is one day.

Spray your plant with neem oil. Make sure to get it into any cracks or crevices you can discover after giving it a thorough inspection.

Keep your houseplant’s leaves out of direct exposure to sunlight until they have dried up completely. Use it once a week to avoid recurring issues.

Like other natural treatments, spraying the plant daily isn’t necessary here. Instead, check on your treated houseplants every few days. Reapply the spray every two to four weeks.

However, young plants can be harmed by using excessive amounts of neem oil. Therefore, you should water it down and test it out in a tiny area before committing to it fully.

There is a common misconception that neem oil is harmful. Despite not being a poison, this substance has a chemical effect on the insects that ingest it, causing them to die.

It stops the insects from eating and reproducing and kills them by interfering with their central nervous systems and hormones. Moreover, it causes the insects to suffocate, hastening their demise.

Neem oil, unlike other organic methods, not only kills insects but also has a slight residual influence that keeps them away for longer.

Use of Neem Oil in Plants

People in the United States use neem oil extensively for their houseplants. However, it may take several days, weeks, or months for the pests to leave the plant altogether because it does not kill them quickly.

It only affects insects that consume plants and does not affect beneficial insects. You will need a small container if you want to use this to water your garden or spray your outdoor plants.

It can be used outside, but it’s essential not to spray it directly on beneficial insects since it may harm them if it makes contact.

People in North Dakota use neem oil heavily during the long winter months. It is entirely safe to use indoors.

Neem oil has been quite effective in ridding houseplants of various pests. This oil deters insects from your gardens, such as beetles, caterpillars, worms, and other bugs that feed on plants.

Millipedes have 34 to 400 legs. These legs are composed of seven individual parts that are essentially identical to one another.

Some produce cyanide to use as a toxin. You can also encounter some bioluminescent millipedes.

How to Get Rid of Millipedes

Millipedes are found in Hawaii in abundance. The first step in getting rid of them is to figure out what kind of millipedes you have.

They have the potential to grow in length and limb count. They resemble worms, the common centipede, and even caterpillars to the untrained eye.

Millipedes have a rounded skull at the top and a flat back. Their short antennae are employed for sensing food, while their big mandibles are utilized for chewing.

Centipedes have only one set of legs on each segment, but millipedes often have two.

Millipedes look like they belong in a horror movie, but in reality, they are not dangerous to humans or property. They can help in the management of other household pests.

Given their diet of decomposing waste, millipedes rarely cause harm to living vegetation. They primarily feed on leaves and other organic matter found in yards.

When they invade greenhouses, they cause damage by eating young plants.

You’ll find them in their natural habitats, where plenty of water and vegetation litter the ground.

If you discover any of these enabling circumstances in your home, you should eliminate them immediately.

Millipedes can be passively captured using a homemade trap that requires minimal construction effort. Tube traps eliminate the need for constant monitoring. These traps can help save time and effort.

Any hardware store should stock vinyl tubing. It can be readily manipulated to fit inside a bottle. Make sure the millipedes at home fit inside by measuring their diameter.

The ripe fruit lure should be placed at the bottle’s base. Put the vinyl tube up to about 2 inches from the opening into the bottle. Ensure the pipe is snug with the aperture, and tape it.

Insecticidal Soap is Effective against Millipedes.

Whip up a batch of soapy pesticides to get rid of millipedes. This approach is efficient without the usage of potentially dangerous chemicals.

Dish soap is a standard recommendation for do-it-yourself treatments. However, unlike insecticidal soap, it may not be effective in getting rid of the bug entirely.

Other Uses of Neem Oil

Toxic residue from synthetic pesticides that topically kill insects and rodents can accumulate in the environment and threaten local wildlife.

Neem oil does not contain any hazardous chemicals and degrades naturally. The usage of this product will not harm any local birds, pets, fish, cattle, or wildlife.

This oil is natural, organic, and biodegradable. It poses no unacceptable adverse consequence. It is safe for the health and well-being of people and the environment in the United States.

Does Not Cause Death Zones As Some Other Insecticides Do

Insect repellents containing neem oil are unlike certain synthetic insecticides. These repellents do not leave a death zone around treated plants, trees, or bushes.

The death zones created by the spread of synthetic pesticides from sprayed areas can be deadly to wildlife, including pollinators.

Neem oil kills insects in any stage of their lifecycle, be it an adult, a larva, or an egg. The active component in neem oil, azadirachtin, can get rid of various insects.

It works by suffocating the insect or pest, preventing it from continuing to consume the leaves.

This oil inhibits insects from progressing to the next stage of development by interfering with regulating hormones.

Over 200 kinds of pests can be eliminated with a single application of neem oil, making it a highly efficient pesticide. Examples of some of the most typical pests are as follows:

Since neem oil is effective against insects at different developmental stages, it can be used during the dormant season to eliminate overwintering pests and their eggs.

It can be sprayed directly on the leaves of plants to deter and kill insects.

In winter, you can use douse plants with neem oil to kill off insects like tent caterpillars, leaf rollers, and other caterpillars whose eggs overwinter on the leaves.

Pesticides Based on Neem Oil are Highly Efficient against Worms

The plant damage caused by nematodes is significant. They are notoriously difficult to eradicate. Root-knot nematodes are among the most devastating pests.

Extracts from neem kernels can effectively prevent them. Neem oil is effective in suppressing the development of larvae.

Neem oil has the opposite effect of conventional chemical pesticides, which can harm earthworms.

The presence of earthworms improves garden soil. As they burrow, they make channels for rainwater and air to reach plant roots.

Additionally, the castings these critters leave behind are rich in potassium, nitrogen, and phosphorus and thus beneficial to the soil.

The decomposition of earthworm carcasses also contributes to soil fertilization.

Effective against Grubs in the Grass

The larval stage of Japanese beetles, also known as lawn grubs, can damage your grass extensively. They create burrows in the ground and eat the grass’s roots.

Large, barren regions will appear where grubs are most active. Neem oil can manage Japanese beetles by discouraging female insects from laying eggs that hatch into harmful larvae.

Additionally, it prevents grubs from multiplying and drives them away from the grassroots. The best effects can be achieved by applying neem oil to the grass at night and again after it rained.

Can be Used on Houseplants

Having your houseplants invaded by aphids is a terrible sight.

Indoor usage of neem oil for pest and disease prevention is essential. If you want to get rid of pests without worrying about the plant’s health, spray the leaves with neem oil.

Can be Used in Greenhouse

Mites, scale insects, aphids, and whiteflies flourish under the humid conditions of a greenhouse. Give up the ghost on these bugs! Protect your plants from these pests with neem oil.

Works as an Effective Fungicide

Neem oil can be used to either prevent fungus growth on your plants or eliminate any that may already be present.

Powdery mildew and other common fungal illnesses, such as black spots and scabs, can be treated with neem oil.

Whether you have an entire orchard or just a few trees in your garden, insects and other pests can be controlled with neem oil.

Worms, especially coddling moths and mealworms, are a common problem for apple trees. Infestations from these insects render apples unfit for human consumption.

Applying neem oil sprays to plants and trees when they bloom, when the petals fall, and again every two weeks after that is the best way to keep fruit trees free of insects.

Spray your vegetable and fruit plants with neem oil twice a day, once at night and once when you wake up. Vegetable plants rely on pollinators like bees to reproduce. Spray accordingly.

Moreover, neem oil can be used to safeguard your nut trees and other attractive plants against pests and diseases.

A herb garden is vulnerable to the same pests and fungi that trouble a food garden. Examples of such pests are:

You can spray neem oil on herbs. You should test a small area to see how the herbs react to the neem oil because some are more delicate than others, especially if they have hairy or fuzzy leaves.

Neem oil pesticides are safe around butterflies, ladybugs, and most other beneficial insects because they only kill insects that nibble on leaves.