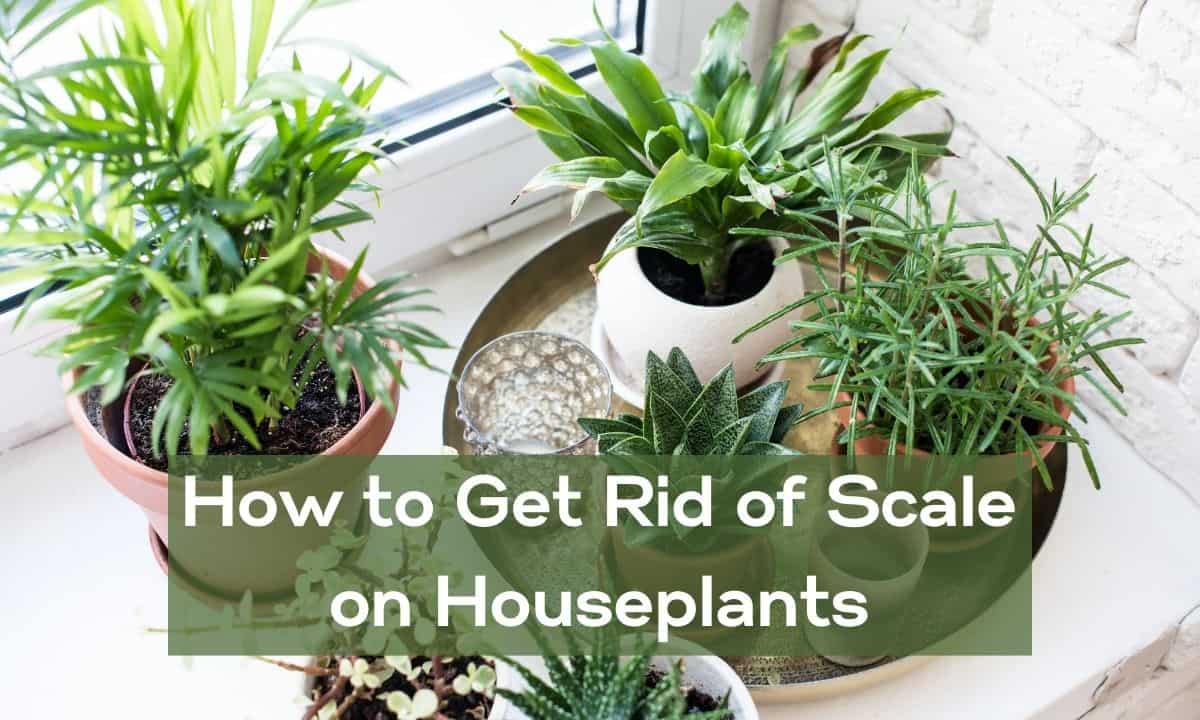 Getting rid of scale insects on houseplants can be difficult – but it is not impossible. When you first notice scale on your houseplants, it is important to isolate it. Then you begin applying one of several methods discussed below to clear out the infestation.

They can damage your houseplants if given long enough, so you have limited time. Most scale infestations go unnoticed until the plant shows signs of obvious damage. Use these methods to deal with scale populations.

Get Rid of Scale on Houseplants

Use the Toothbrush Method

The toothbrush method won’t be enough to clear out the infestation. However, it should help you get started. Note that there are two types of scales: those with soft shells and those with hard shells.

Softshell bugs are mobile and quicker to leave the house plant when exposed to chemicals. Hardshell scales may need to be forcefully evicted – with the help of a toothbrush!

In any case, a toothbrush is a very effective method for removing scales. You have to gently bursh the scale off the plant until they’re gone.

The toothbrush method is very effective for clearing out small-scale infestations. But you don’t have to use a toothbrush.

A more gentle tool like the q-tip or even your fingernail can remove stubborn scales.

Now apply the isopropyl alcohol to the bugs. Try to apply the alcohol directly to the bugs and not the plants. Coating the entire leaf of your houseplant will lead to more damage.

Another good idea is to use a magnifying glass to look closely. This will help you identify the movement patterns of most bugs.

Without a magnifying glass, you may end up missing smaller clusters of the scale infestation. Even a tiny cluster is all it takes for scales to increase their numbers.

Imagine doing all this work only to discover that your houseplant has been yellowed. So don’t be afraid of using the combination of isopropyl alcohol with a magnifying glass.

They are best sprayed when the scale infestation is in the dormant stage. These petroleum base oils are a great preventive strategy to prevent the colony from expanding.

Spray the entire plant with the horticultural, including the underside of the leaves. This method is particularly effective against soft-shelled scales.

The best time to spray the oil is in early spring and late winter. In most cases, a single application of the horticultural oil is enough.

But you can spray your houseplants once more for good measure. Spraying multiple times with horticultural oil is particularly effective when the houseplant is very large.

Just make sure to research your plant species. You never know if your particular plant is susceptible to damage from horticultural oils.

Always spray on a small spot to see the plant’s reaction. Some horticultural oils can lead to plant discoloration.

Using natural oils is the safest way to deal with a scale infestation. Neem oil is a more effective solution that doesn’t harm houseplants.

This natural pesticide is derived from the neem tree. It may be found in many products, such as toothpaste.

All you have to do is coat the affected leaf with neem oil. You can reapply as often as needed until the infestation is cleared out.

Just make sure to isolate the affected plant from others. Quarantining your plants is an excellent way of pest control. You can return the houseplant to its original area once it is free of scale.

Neem oil is great – but it’s not particularly strong.

If you need something more potent, then consider using insecticidal soap. They are readily available from nearby stores and are simple to use.

The best part is that the soaps are not very toxic to houseplants. This makes them ideal choices for use with houseplants in California.

They are usually made from fatty acids like castor oil and olive oil. You could make your own or buy them already prepared by an expert.

Here’s how you can make your own:

You now have a potent mixture that can deal with scales effectively. It should last four weeks before you run out of supplies.

In any case, using insecticidal soap is relatively easy and affordable. All you have to do is a mix the oils mentioned above and spray them.

Repeat the process as often as you need until the infestation disappears. Insecticidal soap is organic and won’t harm your houseplants.

Just make sure to use a diluted solution to lower the concentration of the soap.

Systemic insecticides should be used as a last-resort measure when nothing else works. They are helpful against scales that refuse to get the memo.

You can buy insecticides from most garden stores at an affordable price. You don’t directly spray systemic insecticides on the leaves.

Instead, plants absorb the scale killer through the roots. Simply pour the insecticides into the soil and drench it. That should do the job.

Note that systemic insecticides use a different base than insecticidal soaps. They are a favorite among plant growers when dealing with a scale infestation.

The most popular options out there include acephate, imidacloprid, and dinotefuran. They are very effective at getting rid of stubborn scales.

Pruning is a great way to get rid of scale populations early on. Most houseplant owners have practical experience when it comes to pruning their houseplants.

Pruning, for the uninitiated, is the removal of unwanted buds from a house plant. So if a scale has infested one leaf, you can isolate the infestation.

Make sure to remove the affected bud or leaf and obliterate them. Next, you can apply preventive techniques to keep the scales from returning to the plant.

This way, scales won’t get the opportunity to spread in larger clusters.

The best solution to clear out scale colonies is to introduce more bugs! This may sound like an oxymoron until you realize that predator bugs don’t harm houseplants.

Once they have cleared out the scale colonies, you can relocate them or remove them. The best predator bug in the fight against scale is ladybugs.

But you can also use other natural predators such as tiny wasps and beetles. These beneficial insects are a great option and can keep pests at bay.

It is worth noting that the method isn’t speedy. It takes a while before the predator bugs can fully deal with the infestation.

How to Identify Scale Infestation

There are many scale insects, and it can be hard to identify them. They’re as big as a hyphen with small, circular bodies. It’s easy to think they’re part of the plant at first glance.

Their color may vary from white to brown, depending on the species. The size of these insects ranges from ¼ inch to ⅛ inch.

They are divided into two categories:

i) Armored scales develop a thick cover that looks like a shield. It is composed of wax and shed skins that conceal its body. The shield is not attached to the body of the scale.

Scale nymphs are known as crawlers and have a very similar appearance to adults. They like to move excessively during feeding frenzies. Mature scales tend to settle into a spot and rarely move.

Another way to identify scale infestation is to look for damage done to the houseplant. Some species will stunt the plant’s growth.

Other species cause damage that looks like stress from underwater. The leaves will eventually turn a shade of yellow and drop.

Some plants will die completely. If the scale insects produce honeydew, you might notice the build-up of sooty mold.

This can attract ants who are drawn to the honeydew. The buildup of honeydew and the arrival of ants signals a scale infestation.

In general, most scale populations will not severely harm your houseplants. But they can cause damage if allowed. This is why taking action as soon as you notice them is essential.

Read Houseplants That Can be Planted Together

Adult females lay eggs under their protective covering. The eggs take three weeks to hatch. Newly hatched scales (also known as crawlers or nymphs) migrate out of the covering.

The crawlers will move around the houseplant until they find a suitable feeding site. Young crawlers feed by inserting their mouthparts into the plant.

As they absorb nutrition, they develop their armor. Mature scales become relatively immobile. It is common for some females to reproduce without mating. They do not feed on houseplants.

Some species may develop wings as adults and appear as small gnat-like insects. Scales may have multiple overlapping generations in a single year.

Where do Scales Come From?

You might be curious about where the scale on your houseplants came from.

Scale insects are invasive species. It may be challenging to figure out where they came from. However, the most common places include:

Read How Long To Keep Grow Lights on House Plants?

The best way to control scale infestation is to avoid them.

Scales are more likely to attack plants with an unhealthy foundation. Some scale species are drawn to particular types of plants.

For example, host plants like holly camellias will attract scale insects. A good remedy is to place them next to plants that aren’t hosts.

It would help if you also prevented ants in your garden. This is especially true if you plan to grow scale insect host plants.

Always provide proper irrigation and nutrients. These two serve as the foundational aspect of soil health.

Finally, it would be best to quarantine all new houseplants you buy from garden centers. Scale colonies may infect these houseplants.

Keep them quarantined for a few days and study their leaves for signs of scales. Once the plant is in the clear, you can move it with the others.

Healthy soil retains water to keep the plant healthy in case of moisture fluctuations. Nutrients allow plants to absorb the water they need from the roots. And as discussed earlier, deploy beneficial predators to prevent scales.

Here are a few additional tips for preventing scale colonies:

Maintain  hygiene in the surrounding area:

It is common for drawers to leave the plant and return for more. Isolate the plant from the area, and clean the place and crevices where plants could reside.

Replace the Top Layer of the Soil

It is not uncommon for crawlers to hide in the soil of houseplants. You can always try to remove the top layer of the soil. Always replace it with fresh potting soil that you know is clear of scales.

It can be hard to get rid of scale from houseplants in California. You might need to use several treatment methods. You might miss the eggs and nymphs even if you kill the adults. It can be very frustrating to fight scale infestations, but it is worth it. Let us know how you keep snakes away from your houseplants and preventive strategies.