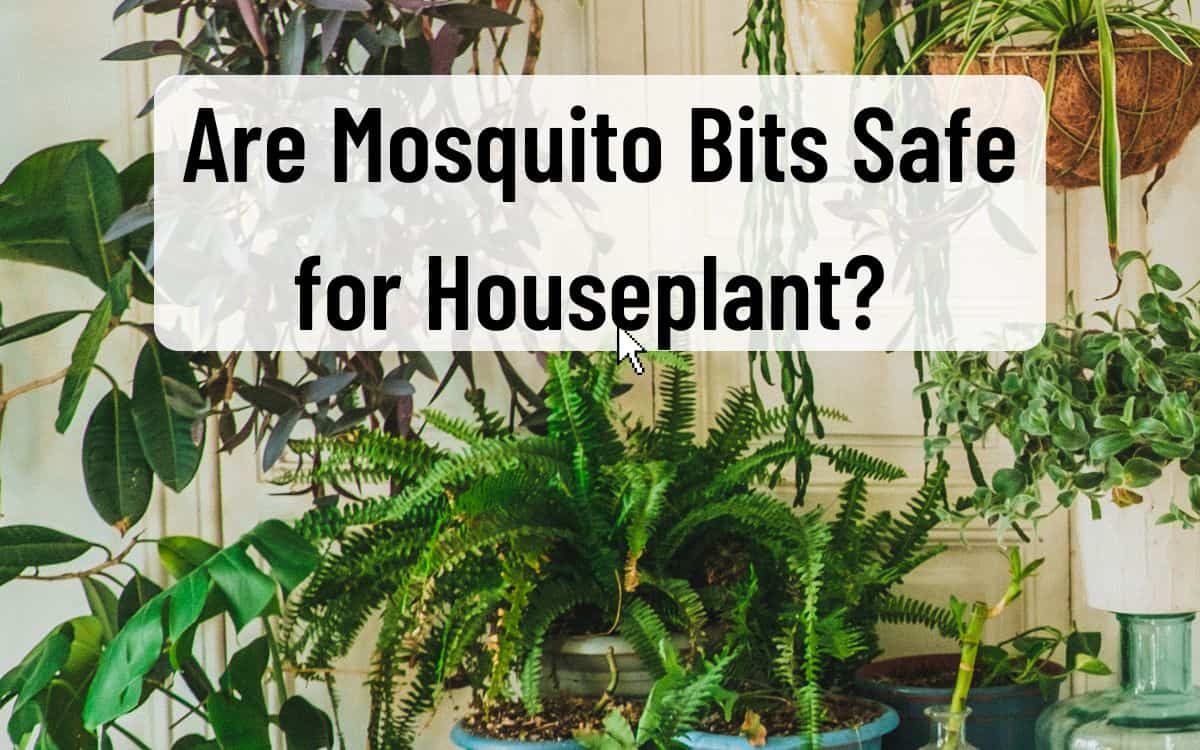 Mosquito bits are safe for use with houseplants in California. The active ingredient in mosquito bits kills mosquito eggs and larvae on contact.

The Active Ingredient in Mosquito Bits

Mosquito bits are a powerful tool in any gardener’s toolbox. They are not toxic to plants, humans, or pets.

However, they are incredibly lethal against fungus gnats and their eggs. Mosquito bits are a biological solution to the problem of mosquito infestation.

They contain the active ingredient known as BTI or Bacillus thuringiensis subspecies israelensis. Don’t worry if the hard-to-pronounce name sets alarm bells off in your mind.

BTI is a species of bacterium that occurs naturally. It is coated on tiny granules (usually corn cob). When mosquitoes (or fungus gnats) eat the granules, it would be their last meal ever.

Note that BTI should be used by following the label. Careful use of BTI will not be toxic to humans or pets.

The product is primarily aimed at killing mosquitoes, hence the name. However, it is just as effective against fungus gnats.

Sprinkle mosquito bits on the top layer of the potting mix. This will create a layer that completely covers the surface.

Water the soil as you normally would. Each watering session will release BTI into the potting mix. As fungus gnat larvae feed on it, they will die after ingesting the substance.

This process should be continued once a week for at least three weeks. You can continue treatment with Mosquito Bits for another two weeks – just to be sure.

Even small remnants of the pests can swell their population in no time. You have to be unrelenting in your pest control methods.

Adding more applications of Mosquito Bits will not kill your houseplants in California. The worst that could happen is that you will run out of supply quicker. This means having to reorder – but that’s a minor inconvenience.

The section below looks at how you can use Mosquito Bits with houseplants.

How to Apply Mosquito Bits to Houseplants in California

Using the product is easy. Shake Mosquito Bits onto the topsoil in houseplants. A few applications of this product should kill fungus gnats in no time.

You can also use it on other plants, including herbs and vegetables. Only a tiny amount of Mosquito Bits are needed.

The pests are usually active in moist areas where water collects. The soil is as good a place as any for fungus gnats to create colonies. You may lower the application frequency if there are only a few fungus gnats.

Applying Mosquito Bits on the topsoil also acts as a deterrent against future infestations. It would make the soil undesirable to fungus gnats for breeding.

Alternative: You can also mix Mosquito Bits with the water itself. You can then water your plants as you usually do.

Mix 4 tablespoons of Mosquito Bits with 1 gallon of water. Allow the Mosquito Bits to soak for a few minutes in the water. Thirty minutes should allow the granules to mix with the water properly.

Now water your houseplants in California for a minimum of three sessions. You can also repeat the number of applications depending on the efficacy of your results.

You may also be interested in; House Plant with Fuzzy Leaves

When to Apply Mosquito Bits?

Adult fungus gnats usually target plants during the winter months. They may also be found in houseplants that you recently purchased.

This is why you should quarantine any new houseplant with Mosquito Bits. You can place the houseplant in your indoor garden after the quarantine period is complete.

As winter approaches, stock up on your supply of Mosquito Bits. Now apply them as instructed. Note that adult gnats can live for about one week. During this time, they will lay hundreds of eggs.

Larvae will emerge from these eggs in about six days. This buys you a crucial window of six days after winter starts.

You don’t want the larvae to feed on your plant’s roots. Apply Mosquito Bits after the arrival of the winter months.

This will ensure that any eggs and larvae die as soon as they hatch. The hungry gnat larvae will eat the BTI and die.

Mosquito Bits will quickly kill all existing larvae within 24 hours. You can continue to apply BTI for two more weeks for the best results.

BTI are naturally occurring bacteria often found in soils. What makes them effective are the tiny spores that produce toxins.

This may sound scary at first until you learn more about the ‘friendly’ toxins. The toxins are designed to kill fungus gnats, blackflies, and mosquitoes.

Unfortunately, this means they won’t work as well on other pests. So if your plant has been affected by several pests, BTI probably won’t work.

Why are Fungus Gnats so Dangerous to Plants?

The real danger associated with fungus gnats is that they can spread disease. Fungus gnats can spread plant pathogens that can cripple plant growth.

In worst-case scenarios, fungus gnats will kill your plants, and they would be beyond rescue. Root-related damage is often a sign of fungus gnat infestations.

Another problem with fungus gnats is that they can also invite other pests. These include aphids and scale, which can further accelerate the death of your plant.

Fungus gnats are extremely tiny and you won’t notice them until it’s too late. They love potted houseplants and thrive in moist soil.

They look a lot like mosquitoes and barely reach sizes of ½ inches. They appear in colors of black and gray, hovering around your plants – almost swarming them.

The biggest source of damage comes from the larvae of fungus gnats. They are located a few inches under the topsoil.

The larvae feed on fungi, decaying organic matter, and plant roots. A massive population of fungus gnat larvae will quickly destroy your houseplant.

Adult fungus gnats are not good fliers. They will emerge from the soil when you disturb it. Adults don’t damage the plants or bite people.

However, their presence can be annoying to people. Their larvae, as mentioned earlier, are the real source of damage.

However, a few applications of Mosquito Bits can disrupt their breeding cycle. Fungus gnats will target just about any plant. However, their primary targets are African violets, cyclamens, carnations, and geraniums.

Besides the adult gnats themselves, the earliest signs of symptoms are sudden wilting and yellowing.

Are Mosquito Bits Safe for Houseplants?

Unlike pesticides that use harsh chemicals, Mosquito Bits are non-toxic. They are safe for people, pets, and the environment.

You don’t have to worry about the product mixing in with the waterway. Or recycling as rain and poisoning the water supply.

Moreover, BTI in Mosquito Bits has been tested by agencies in the United States. It is approved for aerial spraying in many states, such as Massachusetts and Michigan.

BTI is so safe that it can be sprayed on waterbodies like lakes. Large bodies of water such as lakes and ponds are often treated with BTI.

You don’t have to take any special precautions before applying for BTI. However, gloves are recommended when handling soil affected by gnats.

You don’t want to ingest the particulate matter containing the gnats accidentally! If you’re still worried, you can use other alternatives discussed below.

This review would not be complete without mentioning Mosquito Dunks. This product is a commercial rival of Mosquito Bits.

Both products are made by Summit Responsible Solutions and are targeted at different audiences. The ‘dunk’ itself is an object that looks awfully similar to biscuits.

They contain the same active ingredient as Mosquito Bits: BTI.

It is easy to use Mosquito Dunk. However, the application of the product requires a few extra steps. Mosquito Dunks are intended for use in standing water.

They are tossed into standing water and slowly dissolve, releasing the active ingredient over time. However, this is not possible in soil.

There is a workaround – but it will require a little bit of work. Here’s how:

Note: Keep the knife in a different place, so you don’t accidentally use it for food.

Don’t forget to wash your hands with soap and water after using the product. It is not toxic to humans, but you shouldn’t ingest it!

So what are the differences between Mosquito Bits and Mosquito Dunks?

For one, Mosquito Dunks are more complex to use than houseplants. Secondly, dunks are best used to treat large bodies of water at a time.

Both products will kill fungus gnats. But Dunks takes a bit longer to release the active ingredient. Bits worked almost instantly by coming into contact with larvae.

Can I Make Mosquito Bits at Home?

DIY enthusiasts may be excited about starting their own larvae-killing project. However, it’s probably not a good idea.

Unlike neem oil that can be made at home, Mosquito bits should be procured from a store. In other words, you should allow professionals to process and manufacture the product for you.

Where Can I Get Mosquito Bits?

Mosquito bits are easy to buy from just about every home improvement store. You can also find them at reasonably good prices from online vendors on Amazon and eBay.

There are several alternatives to Mosquito Bits. These solutions are beneficial if you cannot clear out adult fungus gnats. Mosquito Bits only work on larvae and not adults.

Here is our round-up of solutions.

Neem oil is highly effective against fungus gnat and their larvae. It is non-toxic to humans, pets, and plants.

Mix the oil with water (as per the product label’s directions). Now drench the neem oil on the topsoil.

You can also toss the neem oil mixture into a spray bottle. Spray plants with the neem oil and watch the fungus gnats run for their life.

Neem oil contains azadirachtin. It is a powerful pesticide that interferes with the lifecycle of pests.

Hydrogen peroxide is excellent at warding fungus gnats. It may also boost your plant’s growth. Just make sure not to apply concentrated hydrogen peroxide.

Mix hydrogen peroxide with water in a 1:4 ratio (in favor of water). Pour the mixture into the soil until it emerges from the pot’s base.

Sticky traps are a popular option for catching adult fungus gnats swarming your houseplants. You can place small yellow traps at strategic locations close to the soil.

The bright colors of sticky traps draw fungus gnats (and other insects) to their deaths. Sticky traps are particularly effective for indoor houseplants in California.

Pyrethrin sprays can quickly cut through fungus gnat populations. To use the spray, lightly mist all surfaces of the plant and topsoil with pyrethrins.

Note that you should kill larvae before they achieve adulthood. The population of fungus gnats will then rebound.

It is recommended to combine the above methods for a more effective solution.

Mosquito bits are a non-toxic and affordable solution that works. However, it only works against mosquitoes and fungus gnats.

Identify the pest that is plugging your plant and devise a suitable strategy. In short, Mosquito Bits are non-toxic and safe for houseplants.

How do you eliminate fungus gnats from your houseplants? Please share your feedback with us!