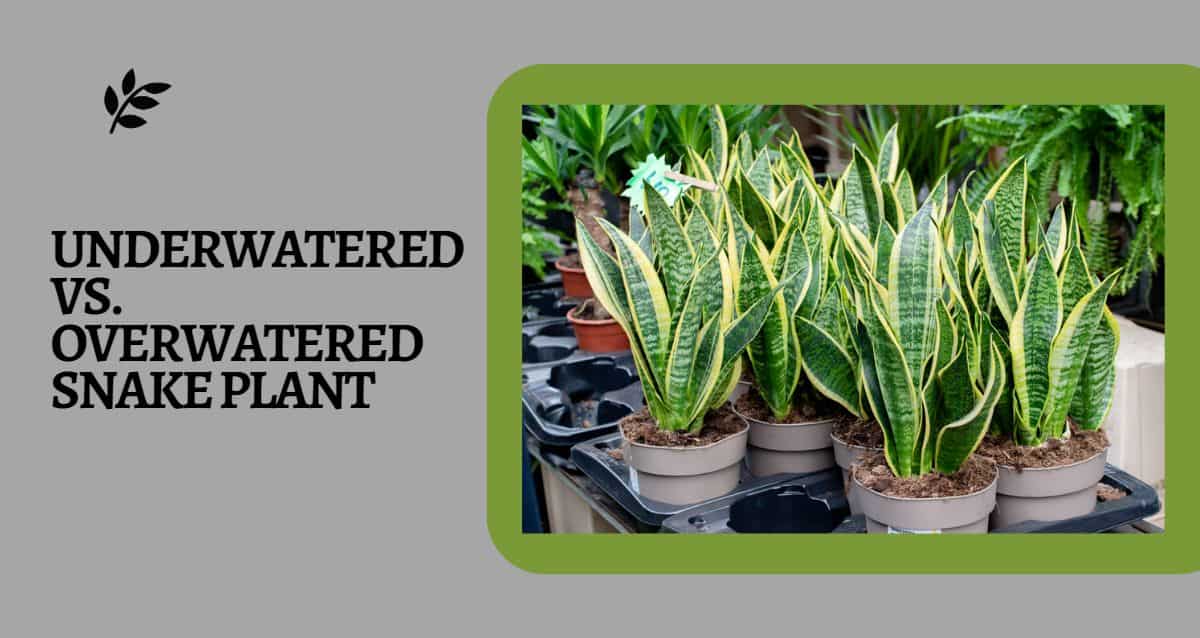 Snake plants, also known as mother-in-law’s tongues, are among the most resilient plant species. This plant’s fleshy and succulent leaves have a low rate of water loss and do not require frequent watering.

Although overwatering is the more common issue that can arise with snake plants, these plants can become waterlogged.

Succulents, which include snake plants, are a type of plant that thrives in tropical environments and requires little to no watering.

When some initially start getting into succulents, they worry that they will overwater them. They have a propensity to adhere to the watering schedule without carefully observing the conditions of the plants.

How Much Water do Snake Plants Require?

During the growing season, snake plants require only a moderate amount of watering once every one to two weeks.

Based on their environment, they have a lower water requirement during the winter months, possibly only once every one to two months. These are broad principles that can be applied to most situations. However, these recommendations are open to interpretation.

Snake Plants are sturdy plants that can survive in dry conditions and require much less water than you might think.

How Do You Know You Are Overwatering Your Snake Plant?

When you overwater your snake plant, you’ll notice that the roots begin to become saturated, dense, and soggy. This happens because the roots cannot absorb any more water.

If you want your snake plant to produce new growth at any point in the future, you should do everything possible to prevent the roots from becoming soggy and rotting.

However, the root ball and the soggy soil are not the only signs that can be seen. Looking at the leaves of the snake plant is another good way to spot problems caused by overwatering.

The leaves of snake plants are characterized by their height and rigidity. With the rigidity of its leaves, a healthy snake plant can give the impression that it is sometimes artificial.

How Can You Keep Your Snake Plant in Good Condition?

The amount of water a plant needs can vary greatly depending on the light, temperature, and humidity conditions it is exposed. When these factors are neglected, the result is sometimes snake plants that have lost their moisture.

A snake plant that has not been provided water will experience dehydration, which will cause the leaves to wrinkle and curl, and the tips will turn brown.

If you leave the plant in too dry soil for an extended period, it will eventually start to wilt and may even perish.

If the problem is not fixed on time, it may result in the death of the plant. To speed up the process of rehydrating and revitalizing your snake plant, relocate it to a shady location and soak its container in water.

Snake plants that are given excessive water also quickly lose their attractive appearance, as evidenced by the drooping and discoloration of their leaves.

The underwatered Snake Plant will typically exhibit several symptoms. Confirming the issue and implementing solutions are required to restore the flourished appearance of the plants.

Underwatering a plant does not necessarily mean that you gave the plant insufficient water at any given time; instead, it most commonly refers to an extended period between waterings. A significant portion of the soil will become incredibly dry before the plant is watered.

The following is a list of signs that indicate an underwatered snake plant:

A snake plant that has been underwatered will have wrinkly leaves and a look of dehydration. The plant’s leaves may appear thinner than usual.

Even though watering your snake plant too little rather than too much is preferable, it is important to remember that a snake plant is not a cactus and requires consistent watering.

Wrinkling of the Leaves

The presence of wrinkles on the leaves of a snake plant is an important indicator that the plant is dried and most likely suffering from a prolonged lack of water.

On the surfaces of leaves, lines known as wrinkles often develop. They can be lengthy or relatively small, and they frequently form a variety of depths.

Read: How To Make My Polka Dot Plant Bushy?

When the plant does not receive enough water—particularly when indoor temperatures are high—the wilting and wrinkling may become more severe.

The scant amount of moisture in their leaves evaporates quickly into the air, which causes the leaves to droop, curl, and shrink. The leaves curling in on themselves indicates that a snake plant needs more water.

The appearance of leaves folded and curled up in loops is typically unappealing. Even though it might point to other issues, you shouldn’t consider the possibility of being underwater.

The Brown Apexes of Leaves

Several factors can lead to brown tips and spots on plants, one of which is a deficiency in soil moisture. Giving a plant sufficient nutrients is impossible without giving it adequate moisture.

If there is a lack of water, the nutrients that come from the soil will not be distributed evenly, which will cause some areas, such as the tips of the leaves, to change color.

If you find that the leaves of your snake plants have turned brown and are crunchy, this may indicate that you have submerged them for an extended time.

It is possible that the plants are not getting the necessary nutrients and moisture due to this, which has caused the foliage on the plants to turn brown or almost brown.

When you keep your plant in water for an extended time, the leaves and the entire plants begin to wilt and fall over. The vibrant leaves will start drooping and might even appear dead.

Since the plant has collapsed, a significant amount of its moisture is lost, and as a result, the plant’s cells and tissues become flaccid, lose their turgidity, and cannot support the plant’s upright posture.

The sub-watering phase also causes disruptions in the supply of nutrients, which can result in the plant’s growth being stunted.

Due to the obvious absence of water, the soil would appear very dry. Hence the dried soil should be replaced and taken care of. Both the roots and the leaves are fragile.

The development of the plant slows down to a painful extent.

The following symptoms are the signs of an overwatered snake plant:

Leaves That Are Tender or Pliable

Snake plants that have received an excessive amount of water will have leaves that are mushy and tender to the touch. You may see this sign before the leaves begin to wilt.

The presence of an excessive amount of water in the leaves ended up causing the morphology of the leaves to degrade, which resulted in the leaves becoming soft, pliable, and sometimes even lumpy.

Have a look: A Guide on Peacock Plant Brown Spots

The leaves are turning yellow. The yellowing of the leaves signifies that many different plant diseases are present.

The appearance and sensation of sliminess on the leaves of a snake plant are two of the most common indicators that the plant has received an excessive amount of water.

They have taken in excessive water, which has caused this effect. There may also be water blisters on the plant’s surface, and the soil will have a wet and heavy feel.

If water got on the leaves of your snake plant while you were watering it, the plant might have already begun to rot or grow fungus. In addition to that, there might be mold growing on the top of the soil.

The most significant risk factor affiliated with snake plants is the development of root rot. Fungi and bacteria can flourish in the soil of your snake plant if there is an abundant supply of water in the soil, and these organisms will eat away at the roots of your plant. As they progress, the smell of rot begins to permeate the damp soil.

Snake plants are distinguished by their capacity to maintain an upright position. If you overwater your snake plant, the entire plant may eventually start to lean over or “fall over.” At this stage, every leaf on the plant will begin to droop, giving the impression that the plant is leaning in one direction.

Succulents such as snake plants are common houseplants due to their low maintenance requirements. Since they help clean the air and produce oxygen during the night, they are an excellent option for workplace use and look great in any home.

Causing root rot and fungal infections in your snake plant can be avoided by avoiding overwatering it. If you catch an overwatered snake plant in its early stages, you may be able to save it from developing root rot.

Even after being neglected for an extended time, snake plants can still experience growth and development. Your plant will continue to live even if you must go out of town for a month or six weeks.

Remember that you need to water your plant as soon as you get home, and then you should return to your normal watering routine.

Since snake plants are native to arid regions of West Africa, they do not require excessive water. Because of where they came from, they can withstand periods spent submerged in water and are also resistant to drought.

Therefore, anyone who travels frequently and is likely to be away from home for an extended time should consider getting a snake plant because this plant can endure its absence.